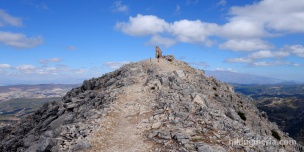 The Lucero or Raspón de los Moriscos is one of the most emblematic peaks of the Sierra de Almijara and the ascent to the peak is a true classic, with reason. Once we are over the Puerto Llano the hike becomes awesome. Via a steep trail through a breathtaking barren rocky landscape we climb to the summit of El Lucero. While we make the climb the views over both the Sierra de Almijara and the Mediterranean Sea become better and better and when we finally reach the summit, we encounter a ruin of the Spanish Civil War when the peak was a strategic vantage point.

From the peaks of these mountains towards the south we have spectacular views on the Mediterranean Sea and around us on the surrounding mountains. In clear weather we can see the Sierra Nevada with the Mulhacén. The highest peak is located in the Sierra de Tejeda, at La Maroma which lies 2,069 metres above sea level.

In the mountains a lot of marble is found, which makes that the spectacular ridges and cliffs are white-grey colored. The disintegration of the rocks forms a sandy soil on which the pine trees have adapted. Higher up the mountains and on the shady side also Pyrenean oaks and mapletrees can be found. In earlier times there were many trees with the name of tejeda to which the Sierra de Tejeda owes its name.

The mountains are the habitat of the golden eagle and hawk eagle. Another remarkable fact is that in this area lives one of the largest populations of the Iberian ibex of Spain.

Despite the proximity of the city of Málaga and the Costa del Sol, the mountains are difficult to access. There are virtually no roads in the mountains, so many hikes are long and have to be started from a relatively low level, which means that the climatic conditions in summer for hiking here can be heavy due to the high temperatures.