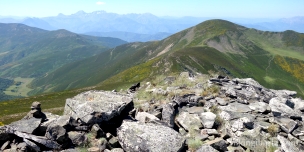 During this hike in the highest and most rugged part of the Alto Bernesga, we visit three peaks: the Pico Tres Concejos, the Pico de Pisones or Camparón and the Pico El Cuadro. Here we really walk in the heart of the central part of the Cordillera Cantábrica, on the border between León and Asturias, with great views 360 degrees around. At the start of the hike up to the Pico Tres Concejos we have to overcome quite some altitude difference in a short time, but after that both the ascent and descent are considerably more gradual.

You can click on the small map in the driving instructions, to open Google Maps in your browser or phone to navigate there.

The Alto Bernesga is a biosphere reserve located in the central part of the province of Leon, in the Autonomous Community of Castile and Leon, and is part of the Cantabrian Mountains. The main towns in the area are Villamanín and Pola de Gordón. The area is characterized by two large valleys where several streams flow, all tributaries of the river Bernesga, in which a lot of trout live.

In this protected area we find forests of beech, birch and oak and native species such as the Spanish juniper. Typical animals that live here are chamois, golden eagles, wolves, bears, grouse, otters, Pyrenese desmans and the broom hare.

In the north of the area around the Valley of Bustamores on the border with Asturias, we find the most rugged mountain area, with rocky terrain, steep slopes and several peaks above 2,000 metres, with the highest peak being Brañacaballo at 2,183 metres. In this area hikingiberia.com offers a hike to the Pico el Cuadro, at 2,089 metres.