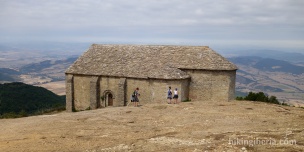 Itzaga is a mountain in the transition area between the Basque Mountains and the Prepyrenees of Navarre, which gives it a beautiful view over both mountain ranges, partly because of its prominence of 800 metres. There is a short direct route from Ardanza de Izagaondoa to the Itzaga, but on this hike we take a slightly longer route so that we can do an attractive circular hike through this mountain range of Navarra.

This part of the Pyrenees runs from west to east over a distance of approximately 425 kilometres in the northeast of Spain through various Autonomous Communities: the Basque Country, Navarra, Aragón and Catalonia. The border between the Pre-Pyrenees and the central part of the Pyrenees is not really clear because the mountains gradually gain elevation the deeper you get into the mountain range. The peaks in the Pre-Pyrenees are considerably lower than in the Pyrenees and do generally not exceed 2,000 metres, with some exceptions such as the Cotiella which is 2,912 metres.

The valleys in the Pre-Pyrenees are generally narrow with an abundance of gorges and ravines. The rivers that flow through these gorges are generally very rich of water which makes these areas ideal for the practice of water sports. A good example of this type of landscape is the Sierra del Montsec, which is located in the provinces of Lleida and Huesca and which is separated by two beautiful gorges: the Mont-Rebei and Noguera Ribagorzana.