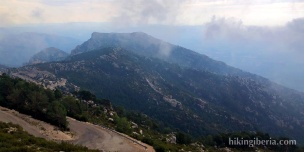 At 1,441 metres, Mont Caro is the highest peak of the Parc Natural dels Ports and also of the Catalan province of Tarragona. An asphalt road also leads to the top, so you likely won't be alone here. Although we are in a low mountain range, the hike takes us along a number of steep and rocky passages. We combine the hike with a visit to the top of La Barcina.

The Parc Natural dels Ports is a protected nature reserve in the transition area between the Iberian System and the Catalan Mediterranean System, in the south of the Catalan province of Tarragona, where it ends in Teruel (Aragón) and Castellón (Valencia).

The park is characterized by two different climates: Mediterranean in the southeast and considerably colder and wetter in the mountains above 1,000 meters. The mountain range is rich in caves, pools and gorges and it is the most important reserve of the Iberian ibex.

The Via Verde, the old railway line from Aragón to the Mediterranean Sea, runs through part of the natural park, nowadays a cycle path. Thanks to the old railway infrastructure of tunnels and viaducts, this is a very attractive and comfortable way to cycle around the area.