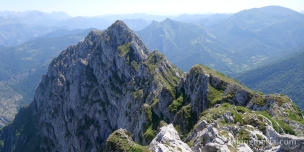 Tiatordos is one of the most interesting peaks of the Redes Natural Park in Asturias. The hike from Pendones develops on a trail that is well marked and in good condition, and we have beautiful views for much of the hike. The precipice of 600 meters at the top on the Ponga side is spectacular and from the top we have views over much of the Cantabrian Mountains, including the Picos de Europa, located not far from Redes.

The Redes Natural Park is the second natural park of Asturias, largely formed by beech and oak forests and many mountains. It is an area that, compared to Somiedo or the nearby Picos de Europa, is relatively little known among tourists, and the tourism sector is clearly less developed.

It is located in the central-eastern part of Asturias, in the concejos of Caso and Sobrescobio and takes its name from the beech forest of Redes, in Caso. It has been a Natural Park sinc 1996 and since 2001 a UNESCO Biosphere Reserve.