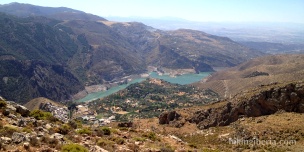 During this hike we climb without too many complications to the summit of the Cerro el Calar (1,861 m.). From this peak we have a wide view over the central part of the Sierra Nevada where we can observe the high summits such as the Veleta and the Mulhacén. On the way back we walk past a couple of interesting rock formations and have a beautiful view on the Reservoir of Canales and above it the town of Güéjar-Sierra, which is the beginning and end of the route.

Of each hike you can download the GPX file which can be used on your GPS device.

The Baetic System (Cordilleras Béticas) is a collective name for mountain ranges in the south of the Iberian Peninsula and the north of Morocco. The range runs from the Rif Mountains in Morocco via the Strait of Gibraltar through Andalucía to Valencia where it continues on the bottom of the sea to the Balearic Islands. The Baetic System is divided into three separate mountain ranges: the Cordillera Prebética, Cordillera Subbética and the Cordillera Penibética.

The Cordillera Prebética is the most northern of the three mountain ranges and runs from the provinces of Jaén and Granada up to Alicante. It contains among others in the province of Jaén the natural park Sierras of Cazorla, Segura and Las Villas. It is the biggest protected area of Spain and one of the areas most visited by tourists. The landscape is just overwhelming: spectacular limestone formations, profound gorges, rugged peaks with wide views and a very diverse vegetation. The area is also abundant with water and one of Spain´s main rivers originates here: the Guadalquivir. As the name of the natural park indicates, it consists of various mountain ranges, such as the Sierra de Cazorla, the Sierra de Segura and the Sierra de Las Villas. The biggest part of the natural park - about 80% - though is formed by the Sierra de Segura.

The most southern mountain range of the three is the Cordillera Penibética, which runs along the south coast of Andalucía, from the province of Cádiz up to Murcia. On hikingiberia.com we offer hikes in the following mountain ranges of this Cordillera.

The Sierra Nevada ("snow-covered mountains") is the best known mountain range in the Cordillera Penibética, in the Andalusian provinces of Granada and Almería. With sixteen summits above 3,000 metres - all of them in Granada - it is after the Alps the highest mountain range of Western Europe. In this mountain range lies with its 3,479 metres the highest peak of the Iberian Peninsula, the Mulhacén. A part of the area is national park (Parque Nacional Sierra Nevada). On the south side of the Sierra Nevada lies the Alpujarra or Alpujarras, a historical area that is known as the latest refuge of the Muslims, which because of that is still rich in influences from the Arabian culture.

The mountains of the Natural Park of the Sierras de Tejeda, Almijara y Alhama form a natural border between the provinces of Málaga and Granada. The mountains of Tejeda and Almijara are on the side of the province of Malaga, while the far west of the province of Granada is home to the Sierra Alhama. From the peaks of these mountains towards the south we have spectacular views on the Mediterranean Sea and around us on the surrounding mountains. The highest peak is located in the Sierra de Tejeda, at La Maroma which lies 2,069 metres above sea level. In the mountains a lot of marble is found, which makes that the spectacular ridges and cliffs are white-grey colored.

The Sierra Espuña is a mountain range of relatively low mountains and is characterized by woods, gorges, brooks, wells and the peaks of the Morrones de Espuña. The Sierra Espuña is since 1992 a regional natural park. At the edge of the Sierra Espuña lie the Barrancos de Gebas. These form a spectacular desert landscape that also reminds of lunar scenery, with gorges and sandy ravines. Near Alhama de Murcia lies the Sierra de la Muela where hikingiberia.com also offers a hike. This is a sandstone mountain ridge, which on the side of Alhama de Murcia stands out as a steep face against this town.