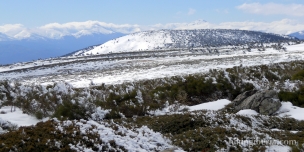 This hike starts at 1,773 meter and goes directly steep uphill through a firebreak. After this we walk a while on a ridge with a few considerable climbs where the views get better and better. Further through the open field we continue to the summits of the Reajo Alto (2,093 m.) and Reajo Bajo, where we can enjoy great views. After a steep descent through a firebreak we can steadily walk back – without difference in altitude – to the car park.

The Central System (Sistema Central) is a mountain range that lies in the centre of the Iberian Peninsula and which has a length of about 600 kilometres. It runs from the centre of Portugal in the west, where the mountains are known under the name Serra de Estrella, towards the east and a few hundred kilometres further towards the northeast, where it borders with the Iberian System (Sistema Ibérico). It constitutes the natural frontier between in the north Castile and León and in the south Castilla-La Mancha, Extremadura and Madrid and also divides the Inner Plateau (Meseta Central) in two parts.

The name Sistema Central is not very frequently used but instead the mountains are known under the individual mountain ranges of this area, among others the following mountains where hikingiberia.com offers various hikes.

The Sierra de Gredos is the highest and most rugged part of the Central System and lies in the provinces of Ávila, Cáceres, Madrid and Toledo. The highest point is located in the province Ávila, at the Almanzor at 2,592 metres, which is also the highest point of the entire Central System. The Sierra de Gredos is characterized by its large masses of granite, and from the south face the mountains give a relatively steep climb. At the heart of the north face of the Sierra de Gredos lies the Circo de Gredos, a cirque created by a glacier. It is the main cirque of the Central System and measures approximately 33 acres. In this cirque you find the popular Laguna Grande, Almanzor and the refuge Elola, used by many climbers and hikers to go to the Almanzor. The bare, rocky high mountain landscape of this cirque is spectacular and one of the absolute highlights of the Sistema Central.

The Sierra de Guadarrama is the most central part of the Sierra de Madrid. It lies primarily in the province of Madrid and partially in the province of Segovia. Its highest point is the Peñalara with a peak of 2,430 m. Its vegetation is dominated by pine forests, and at lower heights by holly oaks. In summer the mountains are very dry, although rainfall here is significantly higher than in the city of Madrid. Because of the proximity of the metropole Madrid it is a very populair hiking area and has it relatively good and well maintained trails.

Further to the east in the province of Guadalajara, Segovia and Madrid lies the Sierra de Ayllón. Special about this mountain range is that the valleys have the most southern beech forests of Europe: La Pedrosa, Montejo and the nature park Hayedo de Tejera Negra. In these mountains a number of rivers arise such as the Río Jarama, Río Sorbe, Río Jaramilla, Río Berbellido, Río Sonsaz and Río del Ermito. This mountain range is a good altermative to - although farther away - visit from Madrid, because you see less people here and it has a different character than the Sierra de Madrid. It largely consists of slate and granite and to a lesser extent of gneiss, and it contains the last peaks of above 2,000 metres of the Central System, thanks to which it gives marvellous views both towards the mountains of Madrid and towards the lowland plain of Segovia.

The Sierra de Ayllón is part of the Sierra Norte de Guadalajara, which forms a connection between the Central System and the Iberian System. Besides the Sierra de Ayllón it contains the mountains of Alto Rey, Pela and the Sierra Gorda, the natural park Hayedo de Tejera Negra, and the nature reserves Macizo del Pico del Lobo-Cebollera, Río Pelagallinas and Sonsaz. The area is criss-crossed with various basins of rivers such as the Jaramilla, Jarama, Lozoya, Sorbe and the Bornova. In the area also lie three important reservoirs: The Vado, Beleña and Alcorlo. Because of its climate it knows a big diversity of both forests - such as beech woods, oak woods, pine forests and tree vegetation on river banks - as well as bushes and grasslands.

The Serra da Estrela is the westernmost mountain range of the Central System, in central Portugal. The highest point of this chain is Torre, at 1,993 meters, the highest point of the Portuguese mainland. The remarkable thing about this summit is that it can be reached via an asphalt road and is located on a large roundabout. To get to 2,000 meters, in the 19th century a tower of 7 meters high was built here, which explains the name of this summit. Here we also find the only ski resort in the country.