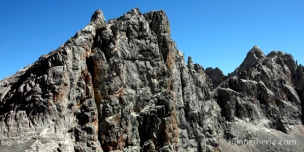 The Torre de los Horcados Rojos is one of the most distinctive peaks of the Macizo Central in the Picos de Europa, on the border between Cantabria and Asturias. From this summit, we have a fantastic view on the amazing scenery of the Picos. As the cable car of Fuente Dé us drops us off at above 1,800 meters, we can reach an altitude of above 2,500 metres with relatively little effort.

The Cantabrian Mountains (Cordillera Cantábrica) are a mountain range in northern Spain parallel to the Cantabrian Sea. The chain is about 480 kilometres long and on average 100 kilometres wide and passes through several Spanish Autonomous Communities: the province of Lugo in Galicia, Asturias, the provinces of León, Burgos and Palencia in Castilla y León, Cantabria, the Basque Country, Navarre and La Rioja. It forms the boundary between the dry Spain on the south side and the green Spain on the north side.

The Cantabrian Mountains have a large number of sub-mountain ranges, including the following mountain ranges where hikingiberia.com offers routes.

The mountain range with the highest peaks, the most rugged scenery and the most spectacular scenery of the Cantabrian Mountains and thus the undisputed highlight of this chain are the Picos de Europa, which lie in three provinces: Asturias, Cantabria and León. A remarkable fact about these mountains is that they have peaks of above 2,500 metres at only 15 kilometres from the sea. It were therefore the first peaks that the sailors saw when they sailed towards the European coast, to which it owes its name of Picos de Europa – Peaks of Europe. Although the peaks here do not exceed 2,650 metres and thus are considerably lower than in the Pyrenees and Sierra Nevada, is this mountain range very popular among both walkers and climbers, thanks to the overwhelming landscape with its steep, rocky and jagged peaks, often called torres (towers). West of the Picos de Europa we find the second natural park of Asturias, the Redes Natural Park.

About 50 km south of the Picos de Europa, in the province of Palencia, lie the Fuentes Carrionas. Here we find an unprecedented relief of summits and ridges of over 2,500 meters, breath-taking cliffs, deep valleys and various reservoirs. In this mountain range lie a number of peaks of over 2,500 metres. In Cantabria lies the Peña Prieta (2,539 m.), in Palencia just south of Peña Prieta lies the Pico del Infierno (2,537 m.) and lie the Curavacas (2,524 m.) and the Espiguete (2,451 m.). In León lies the Pico Las Cuartas (2,451 m.) and on the border of León, Palencia and Cantabria lies the Pico Tres Provincias (2,498 m). Further east in Palencia and Cantabria, we find the relatively small and easily accessible mountain range Sierra de Híjar.

The Sierra de Ancares is the western end of the Cantabrian Mountains and is located in the northwest of the province of León and partly in Lugo, and forms the frontier between Galicia, Asturias and Castilla y León. This part of the Cantabrian Mountains is less known than some other parts of this mountain range and has long remained isolated from the outside world. The landscape is characterized by mountains and valleys, where higher in the mountains we see cirques and lakes formed by glaciers during the Ice Age. The valley was formed by the erosion of the river Ancares, which is a tributary of the river Cúa. It is a medium-high mountain range with peaks of just under 2,000 metres, with the highest point the Pico Cuiña at 1,987 metres. Although the mountains are not so high, at the higher elevations we see spectacular rock formations from where we have wonderful views over the valley of Ancares and towards Galicia and Asturias.

Las Ubiñas-La Mesa is a 451 km² natural park located in Asturias in the central part of the Cantabrian Mountains. Since 11 July 2012, it is a Unesco Biosphere Reserve. The mountain range is an area with relief and strong contrasts, with the most spectacular core being the Macizo de Ubiña, a massif with peaks just above 2,400 meters, such as the Peña Ubiña and the Picos del Fontán. This makes it the second highest mountain range in the Cantabrian Mountains. Further east, in the central part of León we find the mountain ranges Alto Bernesga and Argüellos.

The Parque Natural de Somiedo, Nature Park since 1988, is another mandatory destination to visit in the Cantabrian mountains. Although not large, it is of an unparalleled beauty. It is one of the most rugged landscapes of Asturias with altitudes between 400 and 2,200 metres, with the highest point being the Cornón. The mountain range consists of a wide variety of material, such as limestone, flint and sandstone which has yielded spectacular karst formations. Somiedo is also known for its beautiful lakes. Not far from the Parque Natural de Somiedo finally lies the Sierra de Manteca, which has a more rolling character than the mountains in Somiedo. In this mountain range hikingiberia.com also has a hike.