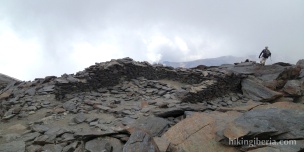 This hike takes us through spectacular high mountain scenery to the Mulhacén, with 3,479 metres the highest summit of the Iberian Peninsula. This variant of the climbing of the Mulhacén starts from the Hoya del Portillo (2,145 m) from where we walk over a dirt road – closed for cars – to the Alto del Chorrillo (2,727 m.). From here we continue with a climb over a smaller and steeper trail, first to the Mulhacen II (3,362 m.) and next to the Mulhacén.

The landscape has to a large extent been formed by old glaciers - which makes there are many high mountain lakes and valleys in a U-form - and is a typical high mountain landscape. It has a huge diversity of vegetation, such as woods in the valleys and small alpine flora and bushes on the higher parts. Besides that it is the habitat of many birds such as the vulture, the imperial eagle or the Alpine Accentor. Mammals that have their habitat here are among others mountain goats, foxes, wild boars, weasels and badgers.

Although these mountains are close to the Costa del Sol, it also is a skiing area with 85 kilometres of pistes, which can be reached quickly from the city of Granada.

On the south side of the Sierra Nevada lies the Alpujarra or Alpujarras, a historical area that is known as the latest refuge of the Muslims, which because of that is still rich in influences from the Arabian culture.