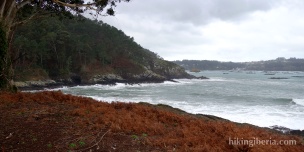 This hike runs through the surroundings of Sada, a village in the province of A Coruña in Galicia. In the first half of the hike we walk near the coast and have beautiful views over the Ria de Betanzos and the Ria de Ares, especially from Punta de San Mamede and Punta Do Castelo. The way back is done through the interior with forests and green fields, farther from the coast.

Through the menu Hikes you can find a list of all hikes.

The Galician-Leonean Massif is a chain of various mountains in the northwest of the Iberian Peninsula, adjacent to the Cantabrian Mountains. Most of the mountain range is located in Galicia, but partly it is also located in the west of the provinces of both Zamora and León. It is a massif of primarily granite with an average height of 500 meters.

The mountain range is divided into a large number of sub-mountain ranges. Adjacent to León and Zamora we find the highest mountains: Sierra del Oribio, Sierra del Eje, Sierra del Caurel and the Sierra de Ancares . The Sierra de Ancaresis also the western end of theCantabrian Mountains and is located in the northwest of the province of León and partly in Lugo, and forms the border between Galicia, Asturias and Castilla y León. It is a medium-high mountain range with peaks of just under 2,000 meters, with the highest point being the Pico Cuiña at 1,987 meters.

Finally, here we find the Natural Park Lake of Sanabria and Sierras Segundera y de Porto, with the most distinctive part being the Lake of Sanabria. It is located at an altitude of about 1,000 meters above sea level near Puebla de Sanabria and is the largest glacial lake on the Iberian Peninsula. In the Sierra Segundera we find a large number of glacier lagunas and a number of peaks above 2,000 meters, such as the Moncalvo, Moncalvillo and Alto del Xurvial.

At the central massif in Ourense we find the Serra do Xurés. The Baixa Limia-Serra do Xurés is a 20,920-hectare nature area declared a nature reserve in Spain in 1993. It is located in the south of the province Ourense and runs all the way to the Portuguese border, where it goes over into the Portuguese National Park Peneda Gerês.

Other mountain ranges in the central massif include the Montes del Invernadero, Sierra del Fial de las Corzas, Sierra de San Mamede and the Sierra de Queixa. The highest point of the Sierra de Queixa is located at 1,778 meters on the Cabeza de Manzaneda. The area is characterized by vast mountains, flat peaks and many valleys of rivers such as the Sil, Laza, Maceda, Cambia or Bibei.

Further to the coast, the mountains are lower and they go over into the Rías Baixas and Rías Altas. In the Rías Baixas lies the mountain range Sierra del Barbanza. The Rías Altas is the part of the coastal region of Galicia that runs from the Cape of Finisterre in western A Coruña province to Ribadeo in the northeast in the province of Lugo, where it borders Asturias.