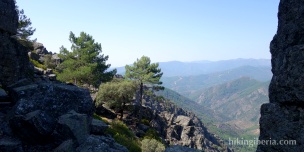 This hike goes through the mountains in the immediate vicinity of the picturesque town of La Alberca, through Las Batuecas and the Sierra de la Alberca. Especially the first part of the hike, through the Batuecas, Risco de Acebos and La Halconera is beautiful, because there we walk through a spectacular rocky landscape. The second part of the hike takes place via dirt roads through the forest, back to La Alberca.

The park is located on the separation between two river basins: the rivers Alagón, Francia and Batuecas flow into the Tagus, while the Agadón flows into the Duero.

The Sierra de Francia is a relatively low mountain range, with the highest peak being the Pico Hastiala, at 1,735 meters. The best-known peak, however, is the Peña de Francia, at 1,727 meters. The rock is known for the Virgin, Nuestra Señora de la Peña de Francia and the monastery and Sanctuary at the top. Every summer many visitors come here, including many Christian pilgrims.

In the nature park lies also the valley of Las Batuecas, which takes its name from the river that flows there, near the municipality of La Alberca. Here we find a spectacular rocky landscape, at the Risco de Acebos and La Halconera.