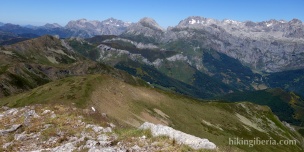 Coriscao is a summit of over 2,235 metres that is located south of the National Park of the Picos de Europa. Because of this very privileged position and its relative prominence, it is one of the best balconies on the Picos de Europa, with a breathtaking panoramic view on this great mountain range. The ascent of almost 1,000 metres goes via a good path with a relatively gradual ascent. The way back, especially the descent along the Arroyo de Puermán, is slightly more difficult because of the lack of a good path.

The Picos de Europa are a mountain range in the north of Spain and are part of the Cantabrian Mountains (Cordillera Cantábrica) and lie in three provinces: Asturias, Cantabria and León. It has the highest peaks, the most rugged scenery and the most spectacular landscape of the Cantabrian Mountains, which make the Picos the undisputed highlight of this mountain range. A remarkable fact about these mountains is that they have peaks of above 2,500 metres at only 15 kilometres from the sea. It were therefore the first peaks that the sailors saw when they sailed towards the European coast, to which it owes its name of Picos de Europa – Peaks of Europe.

In its present size it is a National Park since 2014, but the westernmost part has been a protected area since 1918, the first in Spain. It is the most visited National Park on the Iberian Peninsula. Although the peaks here do not exceed 2,650 metres and thus are considerably lower than in the Pyrenees and Sierra Nevada, is this mountain range very popular among both walkers and climbers, thanks to the overwhelming landscape with its steep, rocky and jagged peaks, often called torres (towers).

The Picos de Europa are divided into three massifs: the Macizo Occidental or Cornión (the western massif), the Macizo Central or Los Urrieles (the central massif) and the Macizo Oriental or Andara (eastern massif). The highest peaks are located in the Macizo Central, which is the most rugged massif of the three, with 14 peaks of over 2,600 metres and the Torre Cerredo, with 2,650 metres the highest peak of the Picos. In this massif also lies the emblematic Naranjo de Bulnes or Picu Urriellu.