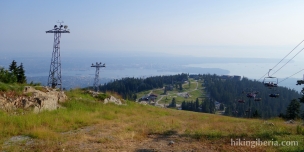 The Grouse Mountain is a mountain located in North Vancouver and is prominently visible from the city. The walk - that leads up more than 800 metres via a steep path with steps to the Grouse Mountain Lodge - is extremely popular among the Vancouverites, as a kind of fitness workout. From the top of Grouse Mountain we have a beautiful view over Vancouver and the surrounding mountains. Because it is not allowed to walk down the Grouse Grind, most people return by cable car. We however, walk back through the much less used BCMC trail.

About 70 kilometres north of Vancouver lies the Garibaldi Provincial Park, a wildlife area in the Canadian province of British Columbia. The park lies east to the Highway 99 - also known as the Sea to Sky Highway - between Squamish and Whistler. The wildlife area measures more than 1,950 square kilometres. In 1927 Garibaldi was declared provincial park.

The park consists of a large number of steep and rugged mountains, with many glaciers on the higher parts. It houses volcanoes such as Mount Garibaldi, one of the higher mountains in the area but still about 200 metres lower than the Wedge Mountain, with its 2,892 metres the highest peak of the area.

North of the city Vancouver lies the Grouse Mountain, a mountain with a peak of above 1,200 metres which is prominently visible from the city. The hike to it is extremely popular among the Vancouverites, as a kind of fitness workout.