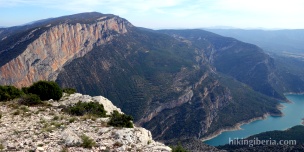 The Montsec is a peak at 1,331 metres to which the Sierra del Montsec owes its name. The route from Montfalcó goes via a well-marked path and in particular from the Collado de Ramis we walk through a beautiful path. On the Montsec we enjoy wonderful views: to the north on the high mountains of the Pyrenees and eastwards on the reservoir of Canelles and the surrounding spectacular landscape of gorges along the river Noguera Ribagorzana.

The Pyrenees are a fantastic mountain range on the border between France and Spain. It originated about 50 million years ago when the Iberian Peninsula (when it was still an island) collided with the European continent. The mountain range is 415 kilometers long and at its widest 150 kilometers. It covers four Spanish provinces (Navarre, Huesca, Lleida and Girona), three French regions (Aquitaine, Midi-Pyrénées and Roussillon) and the entire mini-state of Andorra.

The Pyrenees count as much as 212 summits of more than 3,000 meters, with the highest being the Aneto at 3,408 meters. Still the highest peak of the Iberian Peninsula does not lie in the Pyrenees; this honour is reserved to the Sierra Nevada with its Mulhacén of 3,479 meters.

The mountain range hosts three national parks: In Spain the Parque Nacional de Ordesa y Monte Perdido and the Parc Nacional de Aigüestortes i Estany de Sant Maurici and in France the Parc National des Pyrénées. It has a big profusion of flora and fauna. In the high mountain live mountain goats and marmots and on the lower parts deer, rock-goats, wild boar and birds of prey such as vultures and eagles. The landscape is a very gripping variety of steep mountain peaks, fascinating rock sculptures, deep valleys and ravines, waterfalls, green slanted slopes and vast forests.

Especially in the central part of the Pyrenees in Aragón the mountains are quite desolate and there are only a few villages. Many villages have by now been abandoned. Because of the vastness it can take a lot of time to reach the peaks since long distances and big altitude differences need to be covered. To reach the peaks of above 3,000 metres it is almost always necessary to sleep in a refuge the night before the ascent.