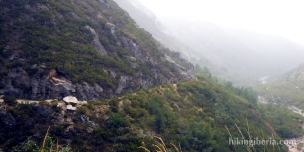 The hike rises through a trail along the river Homem to the old tungsten mines and the lake of Carris. The setting is grim because of the often low hanging clouds, which results in a fascinating scenery. The hike is relatively tough, especially because of the length and the fact that a large part of the trail consists of boulders that are hard to walk on.

The nature park Baixa Limia-Serra do Xurés and Peneda Gerês National Park form a mountainous nature reserve on the border between Portugal and Spain.

Baixa Limia-Serra do Xurés is a 20,920 hectare nature area that was declared a nature reserve in Spain in 1993. It is located in the south of the provinice of Ourense and runs all the way to the Portuguese border, where it goes over into the Portuguese National Park of Peneda Gerês.

It is a mountainous area where the predominant geological material is granite and it includes a number of lakes that are glacial of origin, the lowest of altitude on the Iberian Peninsula. The area is characterized by a wide variety of landscapes, such as steep mountain ranges, small rivers and waterfalls that run between the rocks and dense forests.

Peneda-Gerês is located in the northeast of Portugal and is the only national park of the country. The park consists of various mountain ranges - Peneda, Amarela en Gerês - which form a natural barrier between the lowland plain at the Atlantic Coast and the plateau in the east.

With a mean 130 days of rain a year, it is an extraordinarily green region with a rich flora and fauna. The region is characterized by an abundance of water, in the form of small lakes, rivers (such as the Cávado, the Lima, the Homem, the Rabagão, the Castro Laboreiro and the Arado) and cascades. Because of this quantity of water, many dams have been built.