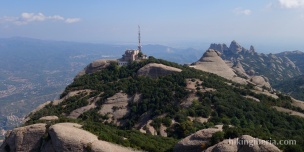 The Montserrat is a rocky massif with a unique shape that about 30 kilometres from the centre of Barcelona erects sharply. From afar you can observe its capricious forms. It is considered the most important and significant mountain in Catalonia and houses the famous Montserrat Monastery. Sant Jeroni with its 1,236 meters of altitude is the highest peak of this spectacular mountain range.

Montserrat is a rocky massif that is part of part of of the Catalan Mediterranean System and which is considered the most important mountain in Catalonia. Located 30 km from downtown Barcelona, it elevates itself abruptly west of the Llobregat River, up to 1,236 meters high at the top of Sant Jeroni.

Montserrat means "sawn mountain" in Catalan. This name is given to the mountain because of its remarkable geography, in which it seems as if attempts had been made to cut the mountains with a giant saw. The whimsical forms of this emblematic mountain are the result of a geological process of millions of years. Because of its prominence, the mountain range can be seen from the wide surroundings.

Montserrat is perhaps the most extensive climbing area in Spain. The mountain range with its 7 kilometers length and 2.5 kilometers width is not that big, but with more than 1,500 mountain needles, climbing walls and rock spouts, there are more than 5,000 climbing routes. Also among hikers the area is popular and there are good trails. There is a cog railway, a cable car and two cable trains, which of course can make this mountain swarm with tourists.

On the mountain stands the Monastery of Santa María de Montserrat (in Catalan: Monestir de Santa Maria de Montserrat). It is a symbol for Catalonia and has become a place of pilgrimage, along with the sanctuaries of Torreciudad, El Pilar, Meritxell and Lourdes part of the Maria route.

In 1987, the Montserrat was named a nature park.