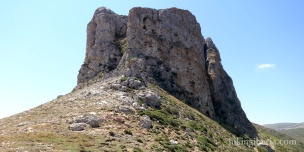 On this route we hike past the Peñas de Herrera, which are four pointed limestone rocks near the charming village of Talamantes. They form a colossal alignment of rocks (cuchillos) and are the most important remarkable part of the eastern end of the Sierra del Moncayo.

Of each hike you can download the GPX file which can be used on your GPS device.

As in many mountain ranges in Spain, the remnants of the Ice Age can also be found here, in cirques such as the Circo de Pozo de San Miguel or Cucharón, the Circo de San Gaudioso and the Circo de Morca.

The vegetation of the park varies according to the height: at lower altitudes we mainly find holm oaks and (replanted) pine trees, at somewhat higher altitudes beech trees and (replanted) black pine trees and towards the top meadows, shrub and undergrowth. The beech trees we find here are among the most southern in Europe. The mountain range is also known among lovers for its many special types of mushrooms.

An area of approximately 11,144 hectares of the Sierra del Moncayo, located entirely in Aragon, has been declared a natural park: the Parque Natural de Moncayo.