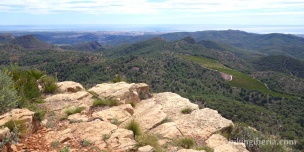 The mountains of the Sierra Calderona are foothills of the Iberian System (Sistema Ibérico) and lie almost entirely below 1,000 metres. During this short and easy hike we hike to one of the peaks in this mountain range, the Mola near the village of Segart, in a rugged landscape of sandstone and limestone. Because it is close to the Mediterranean Sea, it gives beautiful views of the sea, the nearby Sagunto and the city of Valencia.

The Iberian System (Sistema Ibérico) is a chain of medium-high mountains bordering the Spanish Meseta and the Central System (Sistema Central). It has a length of 500 kilometers and a maximum width of 100 kilometers and stretches from the province of Burgos - not far from the Cantabrian Mountains (Cordillera Cantábrica) - to the Mediterranean Sea in the province of Valencia. The biggest part of the mountain range is located in the south of Aragón.

The highest peaks of the chain lie in the north, in a landscape that still has remnants from the Ice Age, such as the Picos de Urbión, a mountain range on the border between the provinces of Burgos, Soria and La Rioja, between the basins of the Ebro and the Douro. Apart from the glacial lakes, the landscape is characterized by a rugged terrain and eroded high peaks with wide views over the green pine forests at lower altitudes. Not far from here, we'll find the Sierra de Neila, a small mountain range located in the far southeast of the province of Burgos. It is part of the nature park of Lagunas Glaciares de Neila. The landscape is characterized by a rugged geography of ridges and chasms, with a great diversity of flora and fauna, for the most part covered with ancient pine forests. In the north we also find the Sierra de la Demanda, Montes de Ayago, Sierra de San Lorenzo, Sierra Cebollera, Sierra del Almuerzo and Sierra del Madero.

The Sierra del Moncayo is located in the central part of the Iberian System, and it is home to the highest peak of this mountain range, namely Moncayo or San Miguel at 2,314 meters, which is also the highest point of the provinces of Zaragoza and Soria. The highest part of the mountain range is located in the north where there are several peaks above 2,000 meters. In cirques such as the Circo de Pozo de San Miguel or Cucharón, the Circo de San Gaudioso and the Circo de Morca we find the remnants from the Ice Age.

In the central area of ​​the Iberian System we also find a low valley named Depresión Ibérica with the most distinctive part being the Fosa Calatayud-Teruel. In this low valley flow the river Turia and Jiloca and the river Jalón river that transects the area. From this river two subsystems originate, one parallel to the Meseta and one running parallel to the river Ebro.

One of the mountain ranges in this system in which hikingiberia.com offers hikes, is the Serranía de Cuenca, a mountain landscape that lies in the northeast of the province of Cuenca and the south of the province of Teruel. It is not so much an area of high mountains but a chain of spectacular rock formations and reliefs, ravines and river gorges. In the area flow three important rivers: the Cuervo, the Escabas and the Júcar. It is a mountain area rich in woods and, because of the abundance of water, very green. It is an ideal landscape for vultures and raptors, and the woods are the habitat of many deer, wild boars and mouflons.

Another mountain range in this system where hikingiberia.com offers a hike, is the Sierra Calderona, a mountain range that is located in the provinces of Castellón and Valencia, in the Autonomous Community of Valencia, at about only 20 kilometers from the city of Valencia. The landscape is a rugged terrain with sandstone and limestone with mostly pine trees and cork oaks. Because it is close to the Mediterranean Sea, it gives nice views over the sea. At the frontier of Valencia and Cuenca we find the nature park Hoces de Cabriel. The park surrounds the river Cabriel and the landscape is characterized by river banks, steep cliff faces and gorges, and is therefore a natural habitat of many birds of prey.