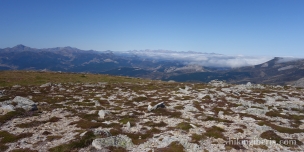 Valdecebollas is a flat peak in the Sierra de Híjar, and one of the higher peaks of this small mountain range in the east of the Cantabrian Mountains and the Montaña Palentina. In addition to the Valdecebollas, on this long circular hike we also visit the peaks of Sestil and Cueto de Comunales. The mountain range borders directly on the Fuentes Carrionas, which, as it were, makes it a balcony on the Fuentes Carrionas and the adjacent Picos de Europa.

You can click on the small map in the driving instructions, to open Google Maps in your browser or phone to navigate there.

Besides beautiful views of the Fuentes Carrionas, we also have a beautiful view of the nearby Picos de Europa. Located in the east of the Cantabrian Mountains, here we find the last peaks above 2,000 meters of the Cantabrian Mountains. In the north of Spain we only find peaks above 2,000 meters in the east once in the Pyrenees.

The highest peaks of the mountain range can be found in the central part, between the Tres Mares and Cueto Mañin, and the highest point is on the Cuchillón, at 2,174 meters. The second peak in height at 2,171, the Pico Tres Mares, gets its name from the fact that it is the only mountain range in the Iberian Peninsula where rivers originate that flow into three different seas.

With a length of 24 kilometres it is a relatively small mountain range, and generally well accessible with wide hiking trails. From Cantabria, the mountain range can be reached quickly from Reinosa and from Palencia via Brañosera, which is at 20 kilometres from Aguilar de Campoo.