The Threshing Floor of San Bernabé 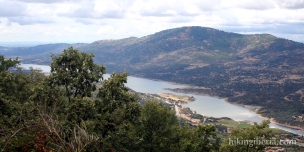 This is an easy hike that with little effort gives a beautiful view over the valley of the river Jerte. The highest point of the route is at the threshing floor (in Spanish “Era”) of San Bernabé, a circular construction that was used to thresh the grain. The plateau where this threshing floor is located, gives an open view on the surroundings. The largest part of the route goes through the forest and is therefore full of shadow.

Through the menu Hikes you can find a list of all hikes.

The Sierra de Gredos is characterized by its large masses of granite, and from the south face the mountains give a relatively steep climb. The mountains consist of five river valleys: Alto Tormes, Alto Alberche, Tiétar Oriental, Tiétar Occidental and the Vera and finally the Valle del Ambroz. In Castile and León the mountains have been declared nature park.

At the heart of the north face of the Sierra de Gredos lies the Circo de Gredos, a cirque created by a glacier. It is the main cirque of the Central System and measures approximately 33 acres. In this cirque you find the popular Laguna Grande, Almanzor and the refuge Elola, used by many climbers and hikers to go to the Almanzor. The bare, rocky high mountain landscape of this cirque is spectacular and one of the absolute highlights of the Central System.

Because of the relative proximity of Madrid, the Sierra de Gredos is a popular touristic region.